Below you will find a list with the most asked questions. If you have any more questions, please feel free to contact us.

Arusha is the capital for safari travels in East Africa, the central position and the close range to the parks is unique. You do not have to drive far before you see the wild animals in their natural habitat. It starts in the Arusha National Park which you will reach in only 15 minutes. Also Kilimanjaro NP, Tarangire NP and Lake Manyara NP you can reach in about one hour.
From these parks you travel further to other parks which are less than one hour drive such as the Ngorongoro Crater and the Serengeti.

Which language do they speak in Tanzania?

In Tanzania the majority of population speaks Kiswahili, but many speak English.

How does it work with my passport and visa?
Nowadays it is possible to obtain a visa at the airport or at the border crossings it is no problem to obtain a visa. The costs are 50 US $ cash and it is valid for a period of 3 months. There is also the possibility to obtain a visa in your home country, which is usually more expensive.

Which vaccinations/medicines do I need?
You must be in the possession of an international proof of vaccination against yellow fever, DTP and Hepatitis A. Also it is recommended to obtain a vaccination against cholera. Furthermore bring some anti malaria tablets. Most of the hotels have mosquito nets. Although Arusha lies on an altitude of almost 1400 meters and malaria does not occur a lot here we recommend putting on long trousers and a sweater in the evening. Also anti mosquitoes sprays can help.

Is there a low season?
Yes it falls in the months of April and May. The prices (luxuriously lodge and Tented Camp safaris, and beach holidays) the prices are then approximately 20% lower.

What is the best way to pay in Tanzania?
In most hotels and lodges you can pay with your credit card or travelers checks. In the large cities of Arusha, Dar es Salaam, Stone Town or Mwanza you can use your regular bankcard at the ATM machines of the Barclays bank. This is very convenient, and also inexpensive. To get money with your credit card is expensive. Also exchanging euro or dollars, is possible in the larger cities. The tariffs strongly vary, it is recommended to visit more different bureau de changes.

Do I have take along a mosquito net?
It is not necessary, because most of (99%) the hotels/lodges/hostels have mosquito nets, and when they have no mosquito net you can always buy one here. They are available on every street corner, and costs approximately 4 Dollars (impregnated).

Which Airline can I use to reach Tanzania?

The prices below are per person, one way and are subject to change without notice.

From Nairobi to Arusha, with airplane:
(and from Arusha to Nairobi)
With Precision Air: € 180,00 p.p.

From Zanzibar to Nairobi with airplane:
(and from Nairobi to Zanzibar)
With Precision Air: € 250,00 p.p.

Serengeti to Arsuha with airplane:

From Nairobi to Arusha by bus?
Shuttle buses from Nairobi to Arusha leave twice daily, in the morning at 08.00, and in the afternoon at 14.00. The cost is € 25 per person (one way), and the journey takes approximately four hours. You may use the buses of Riverside. These buses we can book for you in advance. The buses leave at certain points in the city, therefore it is also possible to make hotel reservations, so the bus picks you up at your hotel in the morning or the afternoon.

From Dar es Salaam to Arusha by bus, and the other way around?
Several times in the morning there are busses leaving in both directions. The first bus leaves at 05.00, and the last at 11.00 in the morning. The bus ride lasts approximately eight hours.
You can travel best with the Scandinavian busses, or with Dar Express, which are the most reliable and luxurious.  The trip costs approximately € 25 pp.

From Arusha to Zanzibar by bus:
First you take the Arusha bus to Dar es Salaam (see above). Hereafter you take a fast boat from the port in drone ash Salaam to Stone Town, at a cost of € 35 and last approximately two hours.

Electricity:
Tanzania uses 230V, and the British three pin as a plug, bring an adapter.

What is the time difference?
If it is summer time in the Netherlands then it is one hour later in Tanzania. In the winter time there is a difference of two hours.

What if we land in Nairobi?
If you land in Nairobi, we can reserve a bus for you. The buses leave every day at 08.00 and 14.00. The cost is € 25, the journey lasts approximately five hours.

Is Tanzania a safe country?
Yes Tanzania is a safe country, but like in every other country in the world you have to be a little careful with your belongings. For example wear a money belt.

Food and drinks?
It is advisable to only drink bottled water and avoid foods from the street vendors.

Which meals do we get served on our Camping Safari at Mt. Kilimanjaro and Mt Meru climb.

Which type of luggage can I take?
Large plastics trunks are not appropriate in the safari car. Bring along a large soft travel gear, with maximum of 12 kilos. In most of the hotels you can store your luggage.

Which type of clothes do I need to take?
Bring light cotton comfortable clothing plus long trousers and a pullover (at night it can cool down considerably and it also helps against mosquitoes). 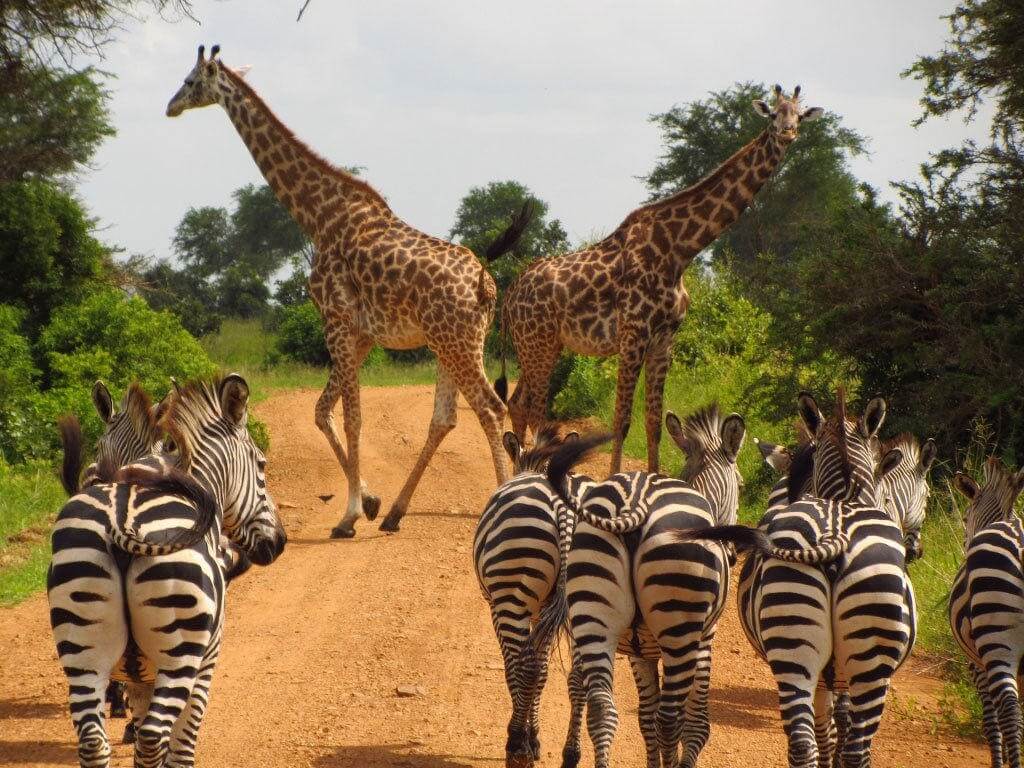 You can reach Hofland Expeditions with all your questions in our office in Arusha. Please feel free to call or email.
E-mail
Skype
Whatsapp